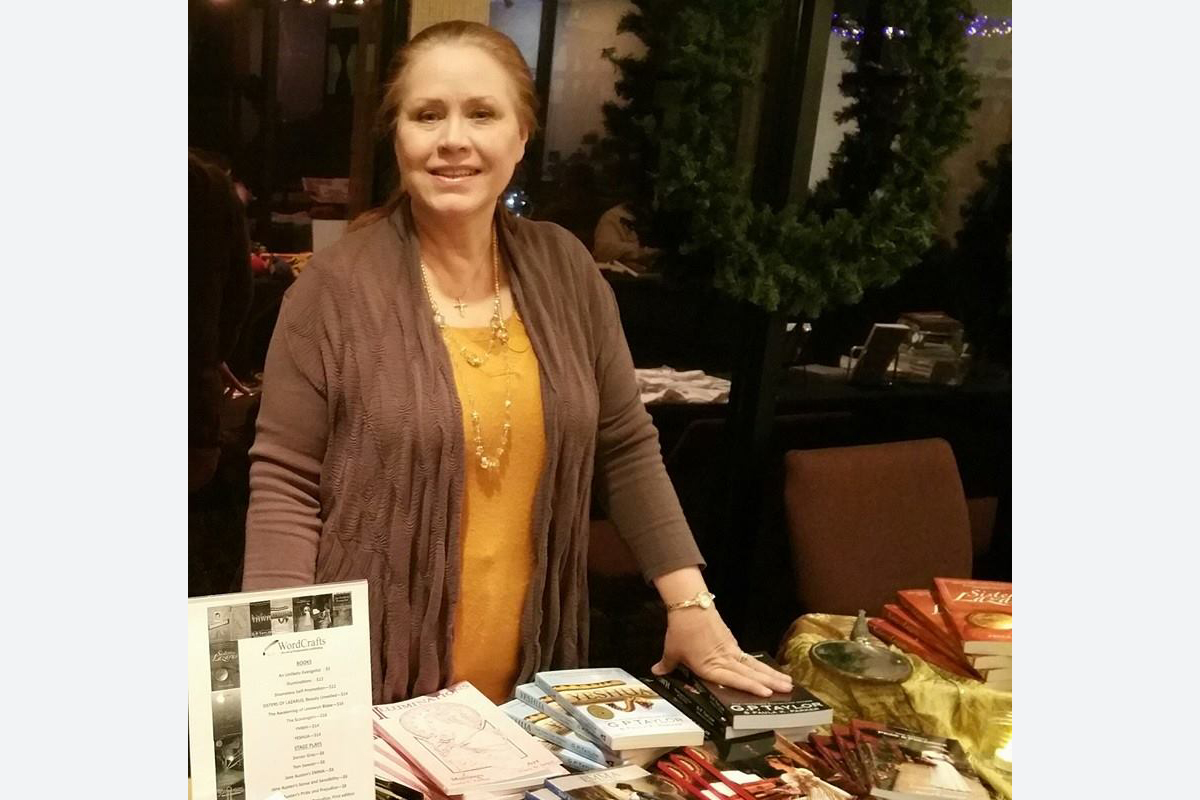 I signed copies of YHWH The Flood The Fish and The Giant at the Gideon Media Arts Conference, held at the LifeWay Christian Conference Center in Ridgecrest, North Carolina.

It was exciting to talk with people about the book and the reasons behind why GP Taylor and I wrote the book and – after they had a chance to read some of the stories – to hear that they enjoyed the book.

YHWH The Flood, The Fish & The Giant is a collection of twenty stories from the Old Testament, including Adam and Eve, Noah, Abraham, Joseph, David, Esther, and Isaiah. While these are not a straight translation from scripture, they are written with the intent of bringing the stories to life in their historical time period.

I know many young people and adults who don’t read the Bible simply because they don’t think the language is understandable. This book is a fresh retelling of those ancient stories that bring the three major world faiths together, but rewritten for pre-teens and above. By saying these books are for pre-teens does not mean that we ‘dumbed down’ the language, but rather that we were careful to avoid topics and words that parents of pre-teens might not want their children reading.

GP Taylor and I desired to stay true to the historic time period as well as the scriptural meaning behind some of the mysteries in these stories. For instance, I’ve always wondered why Rebekah would love one son over the other or why Jonah hated the people of Nineveh. We’re not saying that this is exactly how or why these events occurred, but rather that they might have occurred this way or for these reasons.

“The purpose of the book is not to proselytize or convert,” GP Taylor insists, “but to give children, young people and adults a taste of the mystery of one of the most life changing books ever written. It is an introduction to the stories that have entertained and thrilled people for thousands of years.”

A great advocate of encouraging children to read, Taylor says he felt compelled to participate in co-authoring YHWH The Flood, The Fish & The Giant when he discovered that up to 90% of children and young people in the UK are Biblically illiterate, with even such classic tales as David and Goliath, Noah and the ark, Samson and Jonah going unnoticed.

“This isn’t just a problem from a faith-based perspective,” Taylor points out. “It also devalues our language and our culture. When a sports commentator recently said that the big match was a ‘David and Goliath struggle,’ many young fans didn’t know what he meant.”

Recent evidence suggests that 76% of adults don’t know about the Battle of Jericho; 79% don’t know who Abraham was; 90% have never heard about Jacob. Although many literary giants such as Shakespeare and Milton quoted freely from the Bible most people have no idea that such phrases as mass Exodus, doubting Thomas, the writing is on the wall, all things to all men, eat drink and be merry and no rest for the wicked all have their origins in scripture.

“2011 is the 400th anniversary of the Bible in English,” Taylor says. “Much of our language is rooted in that book. Sadly, we are in the position that within a generation the understanding of the book that underpins our language could be gone forever.”