The Best-laid Plans of Mice, Men, and Gelato 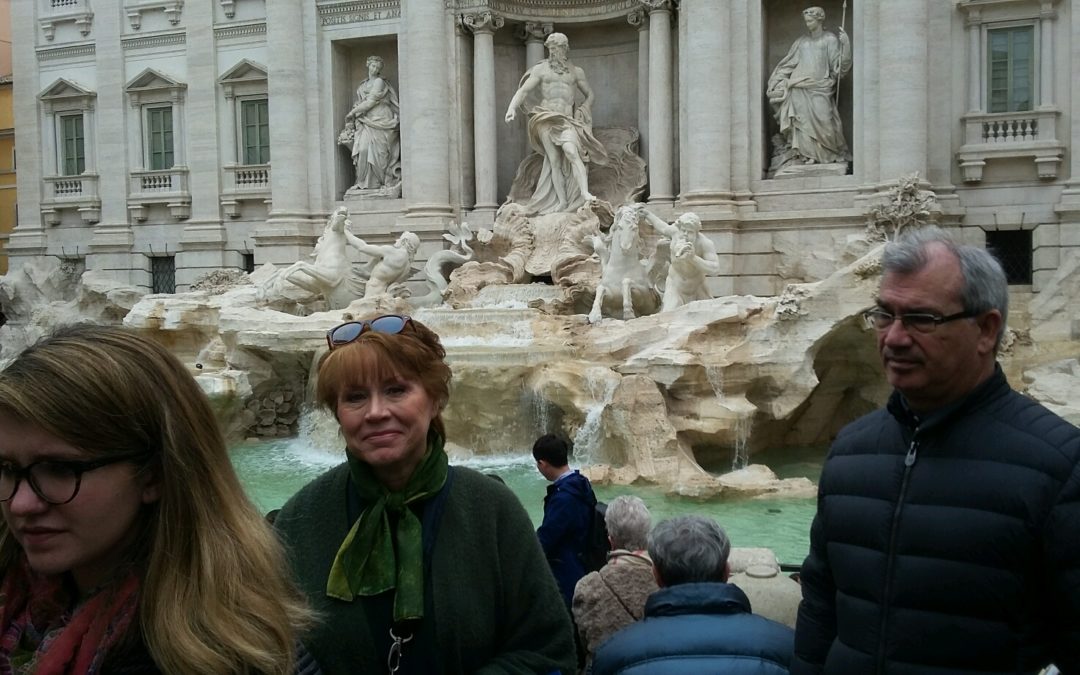 In 2016, my husband Mike and I received a wonderful anniversary gift from our children; an all-expense-paid trip to Italy.

Moments after learning of the trip, my list-loving-self took over. I created a Pinterest board and spent the months leading up to the trip pinning and reading articles about traveling in Italy. I talked to people who had been to Italy—including a friend who lives in Rome and works as a travel consultant. I began learning Italian. I downloaded maps of where we were going to my cell phone, so we could use them offline. I made multiple lists of things to do before we left and things to do once we arrived. By the time we packed our suitcases, I was confident that we were completely prepared for our trip-of-a-lifetime.

Ah, but to quote the poet, Robert Burns: “The best laid plans of mice and men often go awry.”

The first hint that something was beyond my planning was the snow that hit Italy two days before we arrived. This was a historic snow; some places in Italy had not had snow since the 1950s. It was melted by the time we arrived in Rome, although it was cold and rainy. Luckily, I had bought rain ponchos, ‘just in case.’ Our plan was to stay in Rome and make day trips to Florence and Pompeii. But first; we had to get gelato. Mike got butter pecan; I got chocolate.

The next day, we boarded a train to Florence. When we arrived in Florence, it was snowing heavily, which soon changed to raining ice pellets; our rain ponchos and light-weight sweaters did not help. We got lost trying to find our meeting point for the tour; it took an hour to find the location. We later learned that the maps I had downloaded only worked for vehicles; they didn’t work for walking.

After touring two museums, including seeing Michelangelo’s David, we went back to the train station—which was opened to the outside—only to see that our train back to Rome was delayed. We found a place to buy food and gelato. [Yes, it was freezing, but this is Italy!] Mike had almond; I had chocolate almond. We sat for two hours, wondering if our train would be cancelled—many trains were—and what we would do if that happened. We began praying, “Lord, get us back to Rome. Just get us back to Rome.”

Then an employee of the train company came over and asked where we were going. “Rome.” She pointed to a train and told us to show our tickets to the conductor and ask if we could get onboard. We did; the conductor said we could, and we climbed aboard, thankful to be out of the cold. However, that day’s challenges were not over; we arrived back in Rome after the metro closed, and we had no idea how to get back to our hotel. While Mike tried to get a cell signal, I began praying again, “Lord, get us back to our hotel. Just get us back to our hotel.” A moment later, I saw a taxi on the other side of the street. We waved it down and soon were back at our hotel.

That was only the beginning of what we began calling our adventure. It rained every day but one, and only one day wasn’t freezing. We got lost almost every day, despite directions from the locals and the employees at our hotel, “You go two blocks this way, then turn and go three blocks. You can’t miss it. Ten minutes!” We learned that what we thought would be a sausage pizza—the menu said ‘wurst’—turned out to be a pizza covered with hotdogs cut into little coins.

On the plus side, we saw breathtaking art, churches, historic sites, and architecture that were hundreds or thousands of years old. [Several tour guides told us that ‘modern’ meant anything after the 1600s.] We saw street musicians—one was playing a cello—tossed coins into the Trevi Fountain, and had to convince more than one street merchant that we did not want their wares, even if they did drop the price. And of course, we got gelato. Mike had cherry, lemon, and vanilla. I had—you guessed it; chocolate.

The morning we were to fly home, we received a notification from our airline that, due to a nor’eastern forecasted for Philadelphia, our flight had been canceled and we were booked for the next day. The problem was that our hotel was booked solid. After several stressful hours—and more prayers—we finally found a room in a hotel close to the airport.

We got to the airport and through security with no problems. We celebrated by getting one last gelato. By the time we left Italy, I had sampled seven different flavors of chocolate gelato. In Philly, we breezed through customs, and were walking to the gate for our flight to Atlanta. That was when we realized that we didn’t know where we had put the keys to our car.

Mike told me not to worry; that the keys had to be in our luggage. If they weren’t, we would call our roadside assistance.

That was too much for me. I was tired. I was stressed. I just wanted to be home. I was fighting back tears when a song played over the P.A. system: “Everything’s going to be alright.” The song was by David Lee Murphy and Kenny Chesney, but for that moment, it was a message from Heaven.

We landed in Atlanta, grabbed our luggage and after going through each piece and even taking out our clothes, we couldn’t find our keys. You guessed it; I began praying, reminding myself that, “Everything’s going to be alright.” Then Mike picked up the backpack—that we had put in the bottom of the suitcase—patted the pocket and smiled. Unzipping it, he pulled out our keys.

What did I learn from our trip to Italy? First; Italy has amazing chocolate gelato. Also, while you can make lists, plan, check your lists, plan, and organize everything, there are simply some things beyond your control. During those cold, wet, scary, panicking moments, God was with us. He never left us; He helped us. Leading us to where we needed to be just in time for our tour. Having a train employee help us find a different train back to Rome. Or, as Mike was trying to get cell signal to call for a cab, one drove up. Getting us another hotel room when our flight home had been delayed. Or, as I was about to melt down panicking over the car keys, reminding me that, “Everything is going to be alright.”